Curiosity is a Key Element Driving Consumers to try Alternative Meats, Plant-Based Meats Which is Propelling the Alternative Protein Market

For reasons ranging from health consciousness to environmental consciousness, there is a surge in consumer interest and awareness about alternative proteins across the globe. This demand is evident in regions that have relatively better economic stability among the populace or higher levels of disposable income. The alternative proteins trend has moved beyond being a fad. A January 2020 report by Food Insight found that curiosity is a key element driving consumers to try alternative meats, besides the nutritional facts of plant-based meats, which are considered healthier. The onset of the COVID-19 pandemic has further intensified consumer inclination towards healthier eating options. 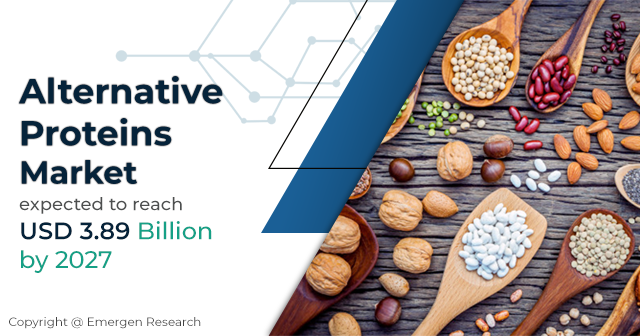 A recent survey by Food Insight focused on the changes in the buying behavior of customers post-COVID-19. The survey reported that in June 2020, 39% of the survey takers were focusing on eating healthier, and over 30% of the poll takers were spending on groceries based on the healthfulness of the food item in August 2020, while a net decline was continued to be seen by fast food or quick service eateries. This growing consumer inclination towards incorporating a healthy diet, mainly after the onset of the COVID-19 pandemic, would be a major driver for the growth of the market. Moreover, with the increasing popularity of dietary regimes, such as veganism, alternative proteins are attracting more consumers looking for nutritional substitutes that accommodate their preferences. Legislations in support of labeling alternative proteins, like the Real Marketing Edible Artificials Truthfully Act of 2019 or the “Real MEAT Act,” are also expected to benefit the market in the coming years.

The leading companies in the alternative proteins space are Cargill Incorporated, Roquette Frères Le Romain, The Archer Daniels Midland Company, Kerry Inc., Royal Avebe UA, DuPont de Nemours Inc., Corbion NV, Ingredion Incorporated, Glanbia PLC, and Tate & Lyle PLC. Plant-based meat makers like Impossible Foods and Beyond Meat have grown exponentially to establish a leading position in the emerging domain. Beyond Meat recently inked an agreement with Jiaxing Economic & Technological Development Zone (JXEDZ) to build manufacturing facilities in the zone and a state-of-the-art facility to produce plant-based meat products, including pork, chicken, and beef, under the Beyond Meat brand in China. A leading casual dining chain in the U.S., TGI Fridays, has also partnered with Beyond Meat to use Beyond Beef for new proprietary items in its chili menu.

Green Boy Group, a supplier of organic ingredients, recently launched the Plant-Meat Protein powder developed for plant-based meat substitutes. It is available in different variants with protein derived from mung bean, pea, chickpea, or fava bean and can be used to make textured plant-based proteins (TPP) either in the form of granule or crisp. Growing investments in alternative proteins, existing companies trying to optimize their product offerings, and conventional meat companies seeking to penetrate the alternative meats sphere will propel the market growth in the following years.