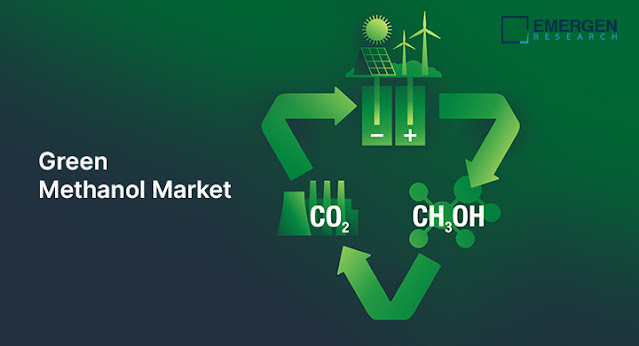 Methanol is one of the most widely produced and used organic chemicals and a crucial raw material for various end-use industries. However, production of methanol by conventional methods releases robust amounts of fossil greenhouse gases. Growing focus on creating a carbon-neutral industrial system has led to the generation of green methanol and is expected to play a significant role in energy transition. Green methanol is a low-carbon fuel that can be produced from biomass gasification or renewable electricity and sequestered carbon dioxide. Green methanol is eco-friendly and can be used as an energy carrier for storing electricity generation from renewable sources. Escalation of climate crisis has created an unprecedented demand for alternative energy fuels and sources. Increasing affordability of renewable energy has enabled production of methanol based on wind and solar power, geothermal energy, or hydropower, which can in turn, significantly reduce greenhouse gas emissions. Green methanol also has the potential to serve as a fuel for maritime fuel applications and can be added to conventional liquid fuels or can be used to fuel 100% methanol-based vehicle systems.

Green methanol production involves biological pathways, thermo-chemical pathways, or electrofuel pathways such as power to gas. Green methanol can play a crucial role in decarbonising both energy and chemical sectors. Use of capture carbon as a feedstock can help reduce the large carbon footprint of chemical industry. Out of the carbon capture and utilisation (CCU)-based chemicals of interest, green methanol has garnered a lot of attention due to its potential role as an energy carrier. Green methanol can be used as a fuel in trucks and ships or converted to olefins to develop molecules of interest.

Shipping industry has witnessed tremendous pressure from regulators and consumers to minimize greenhouse gas emissions. In recent news, A.P. Moller-Maersk announced it would launch a feeder ship in 2023 that would be running on green methanol. Maersk’s new vessel will be running solely on green methanpl; but the ship will also be able to utilize conventional fuels such as very low sulphur fuel oil and marine gas oil, and even LNG to some extent.

In March 2022, Maersk and Egyptian authorities signed a Memorandum of Understanding (MoU) to explore establishment of large-scale green fuel production in the region to accelerate shift towards zero-emission targets. In the same month, Chinese automotive company, Geely began testing its e-methanol vehicles in the Danish port of Aalborg. The two sedans and heavy truck run on e-methanol that is produced by Power-to-X solution, which is a sustainable, carbon-neutral, renewable fuel.

Custom Requirements can be requested for this Report [Customization Available] @ https://www.emergenresearch.com/request-for-customization/985