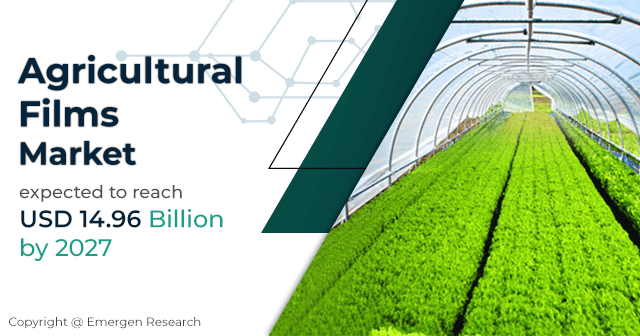 Agricultural films, also known as plasticulture, refers to the use of plastic materials for various agricultural applications. These films are extensively used for greenhouse farming, mulching, and soil protection. Agricultural films reduce soil and seeds exposure, thereby mitigating the impact of weed, conserves soil moisture and nutrients, and decreases soil compaction. Plastics have excellent attributes, such as durability, lightweight, and remarkable property of transmitting radiant energy such as ultraviolet, near-infrared, visible, and other wavelengths. The extensive use of these films confers reduced growing time, early harvest, and a superior yield. The surging populace and the increasing demand for food are boosting the agricultural sector’s growth, in turn, augmenting the requirement for agricultural films. According to a recent analysis by Emergen Research, the Global Agricultural Films Market Size is poised to achieve a revenue of USD 14.96 Billion by 2027, expanding at an annual growth rate of 5.8%.

Agricultural films are typically used to cover greenhouses and are kept over soil or twisted around the feed. The films play a pivotal role in enhancing the equality of crops and boosting overall productivity. The growing demand to augment agriculture’s productivity to cater to the escalating food requirement has paved the way for commercializing these improved coverings. Moreover, the ever-increasing consciousness about product disposal and the hazardous environmental effects of polythene and plastics have boosted biodegradable agricultural films’ adoption over the last few years and is anticipated to propel the market’s growth for the next years.

The primary use of agricultural plastic film was to make a cost-efficient version of the glasshouse. Professor E.M. Emmert designed and built the first-ever plastic greenhouse, a structure made of wood and covered in cellulose acetate film, and later shifted to compelling polyethylene film. The plastic film was then introduced in agriculture as a replacement of paper for mulching vegetables. By the early 1950s, the entire world adopted the use of agricultural films for mulching vegetables. And by 1999, plastic mulch covered nearly thirty million acres worldwide.

Since its emergence in the early 1950s, plastic films have been upgraded and developed to enhance the yield of produce, increase its size, and reduce the growth time. Recent developments in plastic films include increased durability, optical properties, and the antifog or anti-drop effect. The enhancements in the areas include UV-blocking, NIR-blocking, ultathermic, and fluorescent films.

Biodegradable agricultural films are garnering more attention in major economies across the world, owing to their increased environmentally sustainable attributes. The advancement in horticulture with the development of particle-multi layer and UV protective films to enhance agricultural productivity is forecast to bolster the product demand during the next decade. The introduction of biodegradable and bio-based polymers films is predicted to pave the way for the emergence of lucrative opportunities for the industry.

Geographical regions, such as the Middle East & Africa, are increasing their application of plastic greenhouses by 15 to 20% every year, but the growth is weak in well-developed regions like Europe. The scarcity of arable land due to the fast-paced industrialization and urbanization in the Asia Pacific region is anticipated to augment the agricultural films market’s regional growth.

The rising demand for food production has also augmented the need for useful additives and colorants of plastics in the agricultural sector. Agricultural plastics converters require raw materials that can boost the plastics’ durability and augment crop productivity and quality. To cater to such demand, BASF has developed stabilizers and UV absorbers to extend the durability of agricultural applications, even in the presence of harsh chemicals and high UV radiation. BASF’s “ecovio® M” was explicitly developed for the application of films in farming and gardening. The product contains biobased content, is a certified compostable, and is a versatile, high-performance biopolymer.

In 2019, BASF and Tan Hung Co Masterbatch Manufacture Co. worked together to help farmers enhance their crop yield and reduce waste products. BASF’s plastic additive Tinuvin® NOR 371 was used to increase the time and durability of the greenhouse films as they can withstand weathering for nearly four years. In 2017, Yuxi Xuri Plastics Production Co. Ltd., a leading China-based manufacturer of greenhouses, adopted the plastic additive Tinuvin® XT 100 developed by BASF to create a low-density polyethylene (LDPE) film.

In March 2020, Rani Plast launched a new bale wrap, Rani Repel, which provides security to the crops against rodent and birds attack. Rani Repel is a non-toxic and natural active ingredient that is repulsive to ravens, mice, crows, and rats but does not affect the crops.

Challenges Faced and Overcome by the Industry

What serves a significant challenge for the industry is the efficient disposal of agricultural films; which can be diminished through recycling. Technologies now exist that allow the recycling of agricultural plastics into viable plastic resins that can be used in the plastics manufacturing sector. A recent development in the recycling sector is the partnership between NOVA, Calgary-based virgin plastics producer, and Revolution. Revolution will be providing NOVA Chemicals post-consumer resin for sale, and in turn, NOVA will carry out research for end-users for recycled flexible film pet food packaging. Earlier this year, NOVA also signed an annual contract with Merlin Plastics wherein NOVA will assist in producing PCR for food-contact packaging. Under the agreement, NOVA would buy nearly 30 million pounds of recycled plastics from Merlin Plastics annually.

The European Union has set rules for waste management in place which states, “each member state may introduce the ERP concept into its own legal framework in addition to deciding how to encourage manufacturers to participate in the prevention, re-use, recycling and recovery of used plastic products.” In 2018, the EU introduced a set of rules to curb plastic waste and pollution by reducing the single-use plastics and prohibiting the oxo-degradable plastics to mitigate microplastic pollution. Recently, in 2020, EY finally announced its “Circular Economy Action Plan” that includes stringent rules to reduce plastic pollution and scout the microplastics’ existence in the surrounding. It also has a sustainability policy framework for biodegradable or compostable plastics in place.

The escalating technological advancements in the industry, such as the production of UV blocking films, among others, to enhance agricultural productivity are forecast to add to the market growth. Moreover, the rapid utilization of nano greenhouses worldwide to boost agricultural productivity are propelling the agricultural films market growth. The government’s stringent regulations for the usage of polyethylene and plastic are promoting the adoption of biodegradable polymer films. For nearly a decade, established academic institutions and agricultural institutions have collaborated to advance the techniques and technologies for the agricultural films solutions, which has the potential to expand the scope of the market over the coming years.