Increasing use of Wearable Biosensors for Real-Time, Accurate Healthcare Monitoring will Drive the Biosensors Market Growth 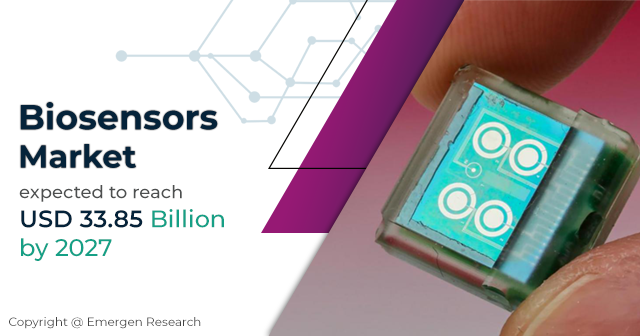 Biosensors are analytical devices that can detect the concentration or presence of biological analytes, microorganisms, or biological structures. Biosensors have numerous applications in industries, such as medical, food, and agriculture, among others. They have also found a vital place in COVID-19 diagnosis. SD Biosensor’s STANDARD Q COVID-19 IgM/IgG Duo Test Kit for the rapid detection of SARS-CoV-2 in humoral fluid received EUA (Emergency Use Authorization) from the US FDA in April. The company has also co-developed a SARS-CoV-2 point-of-care (PoC) antigen test with Roche Diagnostics.

A potential cross-industry application that would boost both the biosensors and the wearable devices markets in the following years is the increasing use of wearable biosensors for real-time, accurate healthcare monitoring. A biosensor that can be printed directly on the skin has recently been created by a team of researchers headed by Penn State University’s Larry (Huanyu) Cheng, the most interesting use of which would possibly be for diagnosing COVID-19. The leading companies in the biosensors sphere include Abbott Laboratories, Molecular Devices Corporation, Biosensors International, Bio-Rad International, DowDuPont Inc., Pinnacle Technology, Thermo Fisher Scientific, Siemens Healthineers, TE Connectivity Corporation, and Roche Diagnostics. Both companies and scientists have been exploring the uses of biosensors, and recent years have seen rapid development on the research front.

In a major breakthrough, researchers from the  University of Virginia School of Medicine have developed a simple improvement to fluorescent biosensors prevalent in both medical and scientific research, making it easy for scientists to study biological processes, develop new treatments, explore the happenings within individual cells, and solve other problems connected to different diseases. The biosensors can detect individual targets inside a cell and illuminates them, allowing scientists to monitor and measure biological occurrences that have otherwise been impossible. Researchers Shen Zhang and Hui-wang Ai found that adding 3-aminotyrosine turned the green biosensor red, as explained in the research paper published earlier this month. They tested their enhanced biosensor on insulin-making cells in the pancreas and were able to track the effect of high levels of glucose on the cells.

This week, a team from the Albert Einstein College of Medicine and Duke University has fabricated a novel type of genetically-encoded neural biosensor operating in near-infrared light. The biosensor will help in the non-invasive study of neuron firing at deeper levels in a living brain while tracking the oxygen consumption. The researchers hope that these near-infrared biosensors will become key molecular tools to be used in animal models of human diseases and cognitive neuroscience research, which will help scientists see the mechanisms of different behavioral and emotional regulation in the brain. These developments and the subsequent advancements in the application of biosensors would be a significant driver for the growth of the biosensors market in the following years.