Quantum Cascade Lasers (QCLs) operate from MIR (mid-infrared) range to terahertz. The fingerprint region of the MIR range is vital in the field of spectroscopy. Unlike other technologies, like the FTIR spectroscopy, wherein the sample is simultaneously exposed to the entire available wavelength, QCL gives the option of tuning it to individual wavelengths, enabling alternative modes of operation. QCL operates at speeds and wavelength accuracy that are significantly better than that of FTIR. 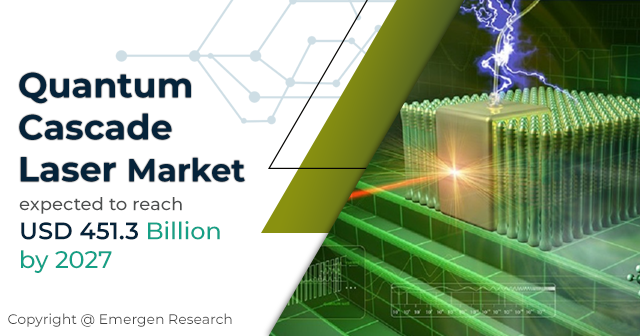 Terahertz lasers are being studied profusely owing to their ability to penetrate ubiquitous packaging materials like fabrics, cardboard, and plastics, and can also help detect and identify a variety of chemicals as well as biomolecular species. They even work for imaging of several kinds of biological tissue, as they also do not cause any damage. To unlock their full potential, it was necessary to enhance their brightness and intensity, which can be accomplished by increasing the beam quality and power output. A recent study by a team from Lehigh University found a simple yet efficient way to increase the power output of single-mode by employing a novel kind of “distributed-feedback” mechanism. It was a major breakthrough in the field and garnered a lot of attention for QCLs. The scientific and technological advancements will open new avenues for the market, propelling its growth in the future.

Even with their extensive use as a semiconductor laser and in collision avoidance radar, industrial process control LIDAR, and automotive cruise control, ever-changing consumer demands and cost of QCLs might impede the adoption rate, thereby hindering the growth of the market. The leading companies in the market are well-equipped with large manufacturing facilities and are investing in research & development activities. Some of the prominent QCL players are Alpes Lasers SA, Emerson Electric Corporation, Hamamatsu Photonics K.K., Mirsense, Wavelength Electronics, Inc., Akela Laser Corporation, Block MEMS, Thorlabs, Inc., Nanoplus Nanosystems and Technologies GmbH, and Adtech Optics.

Swiss company Alpes Lasers recently announced that it is working with on a new laser-based sensor to detect traces of toxic substances in wastewater in collaboration with some a team of European scientists. Researchers from the company have teamed up with academic institutes and oil industry partners to develop an ultrafast sensor capable of detecting the “tiniest concentrations” of suspended solids and oil in wastewater with Frequency Comb Quantum Cascade Lasers. The broadening application scope of the technology is attracting companies to invest in new projects and will foster the growth of the market across the globe.